Waratah 2013 – The Amazing Race was a huge success earlier this month with nearly 200 participants competing across Sydney and supported by over 90 adult volunteers.

Teams travelled from Circular Quay on Friday evening via Observatory Hill to Cockatoo Island for Friday night. Saturday saw participants travel to Woolwich, the Royal Botanic Gardens, Manly Beach, Sydney Olympic Park, Lidcombe and then to Nurragingy Reserve overnight. Our final day featured the Rooty Hill, Penrith, Glenbrook and Westmead on the way to the finish line at Parramatta Town Hall. Over 30 activities were completed with participants travelling a total distance of more than 300 km using buses, trains and ferries.

All Units in GWS fielded a team during the event, as well as a team from NSW Girl Guides and teams from Hume, South Coast, South Metropolitan, Sydney North, and The Golden West Regions.

The Top 10 Results are as follows:

The Race was featured in the Penrith Press earlier this week: 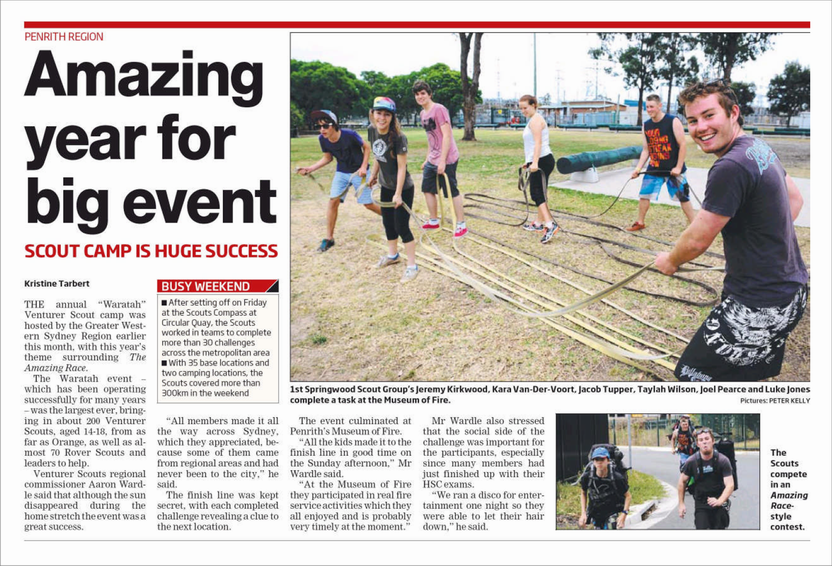 Special congratulations to Matt Vella (Camp Chief) and his huge team for ensuring the race ran so smoothly.

The following Scout Fellowships were represented at the event: Pinnaroo, Cumberland Gang Show and Waratah Activity.

To everyone involved, a job well done and we look forward to having everyone return for Waratah 2014 – Enter the Tahrdis!